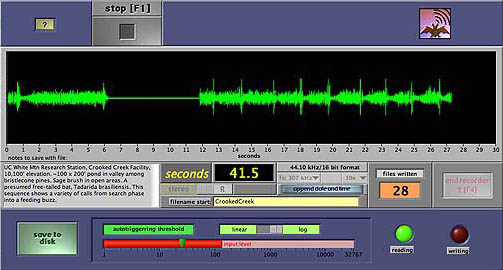 Screenshot of AutoRecorder panel. The AutoRecorder will continuously recognize and record call sequences to your computer and save them with a filename header and date and time stamp.

The AutoRecorder lets you automatically record files and have them saved as SonoBat wav files possessing SonoBat file attributes. You can then analyze them using SonoBat or other signal processing software. This greatly facilitates monitoring efforts, particularly when you would like to simultaneously monitor multiple sites, or carry on the monitoring while you tend to other tasks.

You can use the AutoRecorder in several ways:

The AutoRecorder will name files in one of two user-selectable filenaming schemes. When directly attaching an autotriggering detector to the computer, you may prefer the date and time appended to the file name. For example, if autorecording calls at Bat Spring on 4 July, 2002, you might enter “Bat Spring” in the “filename start” text box. The files will then appear named as

and so on. The time format is HHMM,SS.

For downloading a series of recordings from a tape, you may prefer a file number appended to a filename start with the date of the recording. Otherwise, if you downloaded your calls with append date & time active, the dates and times will not reflect the times when you collected the call sequences, but rather the times when you downloaded them to your computer. For example, if a tape was collected at Bat Spring on 4 July, 2002, you might enter “Bat Spring-4Jul02” in the “filename start” text box. The files will then appear named as