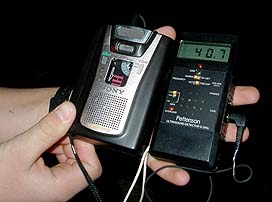 Voice-activated Sony tape recorder attached to an auto-triggering Petterrson D 240x. The units may be stacked to achieve a more compact package.

Although the highest quality audio work demands direct to computer (e.g. using the Sonobat AutoRecorder) or a digital audio tape (DAT) recorder, we have achieved very satisfactory results using a Sony TCM465V Pressman portable cassette recorder (about $50) for overnight unattended recording. We find this set up to perform well for inventory and monitoring studies such as establishing species presence or absence, or for acquiring data for species accumulation curves. Together with an auto-triggering Pettersson D 240x the set up forms a small and easily protected package to implement in a field setting. Many inexpensive tape recorders have significant variablity in their tape drive motor speed that results in frequency flutter, but in our experience, these Sony units are very constant (there is a manual speed adjustment however; just be sure to leave that at unity). Also, these units record only mono sound, so they must be connected to the detector to receive only the time expansion signal (cabling arrangements to do this are shown in the SonoBat User’s Guide).

Set the D 240x to auto-trigger and set the recorder to voice-activated record and then return at a later time to recover your data. Then download into SonoBat for analysis using the SonoBat AutoRecorder utility. These recorders have an automatic gain control which ramps up the volume during the quiet intercall intervals. This fills the sonograms with annoying noise between the calls, but as you can see from these examples, the calls themselves are nicely rendered and entirely suitable for species recognition.

The call on the left was downloaded from an overnight tape recording made beside a pond at a remote mountain site at an elevation of 10,100 ft (3080 m). Few, if any bats were expected at this near alpine location. However, the recording data revealed five species throughout the night, all previously unknown to this location. Although the recording artifact noise is visible before and after the call, the call itself is rendered with sufficient detail to compare it with the referenceCorynorhinus townsendii call to its right.

Another call from the same tape. This one reveals a call from a Tadarida brasiliensis, which had never been documented anywhere near this elevation in this mountain range. Subsequent netting eventually confirmed this acoustic record, which was recorded on the very first night of study.